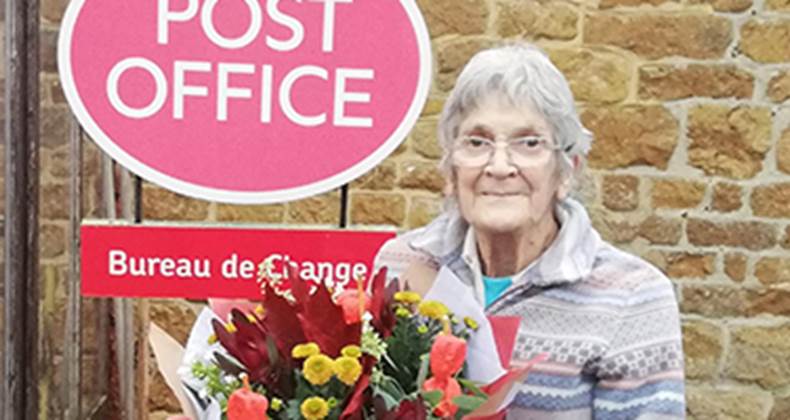 Long-serving Postmistress Barbara Alt retired on 31 October after 30 years in the vital community role in the village of Barford St Michael in North Oxfordshire.

The 89-year-old decided to close her farm shop and Post Office. Barbara and her husband, share the same birthday and will be 90 and 100 respectively on 11 March.

Barbara became Postmistress on 9 January 1990 when she took on the Post Office at the family farm at The Manor House in Barford St Michael.

Over the years the shop was added, then extended. The Cheyney Manor House campsite was added to the site as part of the Government encouraging farmers to diversify. Over the years there type of farm has changed too from a dairy farm to cattle, pigs and sheep reared for meat. Now it is an arable farm with just sheep.

The farm and camping will stay, however, Barbara feels because of her age that it is now time to close the shop and Post Office that she has run with her daughters Rachael and Naomi.

Barbara said: “I have really enjoyed running the Post Office and shop. The job became easier when the Post Office system was computerised and we no longer had to hand write lots of forms. I have got to know so many people in the village and many generations of the same family.

“Many older people and those without their own transport rely on us, so I am pleased that there are plans for an outreach Post Office”.

Many villagers have popped in to say thank you and goodbye and given cards and gifts and a bouquet of flowers from Josh Richardson, Area Manager.

Barbara was one of our oldest Postmasters – we have another Postmistress in Shropshire who is 93, who is still serving her community.

Josh Richardson, Area Manager, said: “We really want to thank Barbara for her loyal and dedicated service. It is amazing that Barbara, aged 89, has still been serving her customers. We know how important a Post Office is to a community and we will be restoring a service to the village as soon as possible”.

There are plans to start an outreach Post Office at Barford St Michael Village Hall. Plans are being finalised as a new telephone line needs to be installed to provide the service. This service is due to be provided by the Postmaster for Fritwell.

In the interim alternative branches include: