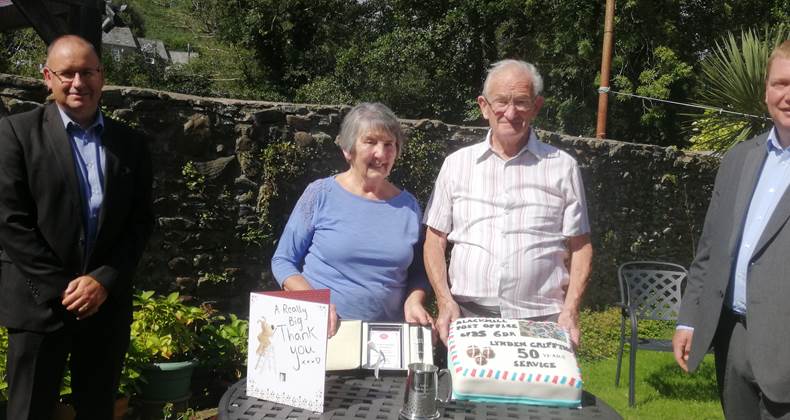 The shop in Bridgend in the Northern Ireland and Wales region has been in Lynden’s family for 98 years. It first belonged to his Grandmother, Elizabeth Griffiths and then his Dad, Gwilym Griffiths. Lynden and his wife Pat, who have been married 56 years, are well known and respected in the community. Lynden was a senior magistrate and councillor.

Lynden became Postmaster for Blackmill 50 years ago, when the shop across the road, where the Post Office had been based, was demolished to straighten the road. Prior to this, Lynden was working in a job up north and he brought his original Post Office counter down with him.

The 82-year-old still works in the branch and shop with his long-serving assistant Ruth Bees. Ruth has not had a day off work since before Christmas to help maintain Post Office service, as Lynden was shielding from serving customers for two months’ during lockdown but was still busy working behind the scenes. His Grandaughter, Lucy Bagnell had to stop temporarily working at the Post Office as she is pregnant and is soon expecting her first child.

To mark the golden anniversary Head of Network, Andy Kingham, presented an award to the loyal, long-serving Postmaster. There was a cake, presents and cards to mark the occasion. Regional Manager Lynn Lewis and Area Manager Fiona Hogg were also in attendance.

Andy said: “We wanted to mark Lynden’s special 50th anniversary as Postmaster as very few of our Postmasters reach this special milestone. Lynden is loyal and dedicated to the village that he serves. The Post Office and shop are at the heart of the community. It is amazing that Lynden still serves customers and runs a fabulous shop and he is 82!”

Lynden said: “I don’t want to retire. This place keeps me going. I know so many people in the village and that can be five generations of the same family. I am known as Lynden the shop. We are a major part of the village. During the pandemic we wanted to keep the Post Office and shop open as we provide vital services and people wanted to stay local. We were busier as people did not want to travel”.