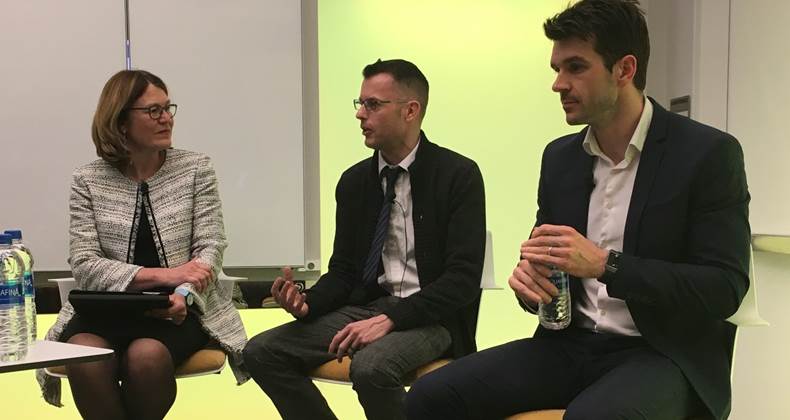 Becoming a leading provider of digital identity services is one of the key ambitions of our North Star strategy. Bryn Robinson-Morgan, our Chief Product Officer for Identity Services, was invited to speak at the IMF (International Monetary Fund) and World Bank spring meetings on 19 April, in recognition of his influence in this field.

The theme of the lecture series was ‘Beyond the Hype – A New Reality’ and Bryn has written about it on LinkedIn and Twitter. Here’s an extract.

'Last week (19th April) I was privileged to be invited to the International Monetary Fund and World Bank’s Spring Meeting in Washington D.C. to talk on Digital Identity as part of their FinTech Exchange iLab sessions.

Before my session began, I was able to catch the lunchtime One-on-One session with Christine Lagarde and Michael Bloomberg.  This was really inspirational, hearing how during his time as Mayor of New York, Bloomberg had taken action to tackle climate change and also introduced the smoking ban within the city.

He made a couple of points that really resonated with me. On the subject of climate change, he said that you can’t change people’s behaviour by telling them what might happen (however likely) in 2050; you have to show them how it is impacting them today.

On the smoking ban, he talked about how his neighbouring Mayors had mockingly thanked him ahead of the ban, as they believed they’d get increased business from visitors opposed to the ban. Yet the reality was that the influx of non-smokers to New York was far greater. His assertion here was that if you do the right thing, for the right reasons, you will win out eventually.

The final takeaway was that if you’re making a big change, you should treat it like removing a sticking plaster. If you try and implement a big change by slowly pulling off the plaster, you’ll give up because it’s too hard and too painful. You need to go for it and rip the plaster off as quickly as you can.

In my own panel session, I spoke about my journey over to Washington, how I’d been required to share my personal data for booking my flight, several times as I made my way through the airport, and again as I arrived to check in at my hotel.  Each time, I’d shared more information than I actually needed to.  Each time, it had been checked by people with different levels of skill and competency in doing so.  And each time, if these processes we’re joined up they could have been done with less friction, less data being sprayed around and with greater confidence that I was who I claimed to be.

Thinking back to the Bloomberg/Lagarde session, how do the lessons here relate to digital identity?  Firstly, we must make this relevant and useful to clients and to users today, rather than promising a bright future that may never happen.  We need to deliver immediate benefit, even if this only resonates with a subset of the potential customer base or client use cases.

Secondly, we can’t continue to support the status quo.  We know that it is wrong to have to show your name, address and date of birth to the creepy barman, by showing him your driving licence to prove you're above the legal age limit.  As regulators and legislators, we know it’s wrong to give more incentive for a firm to store a paper photocopy of a passport in a filing cabinet, than it is for a digital confirmation of identity from a certified provider.

Digital identity is the right thing to do, and for the right reasons.  So, let’s get on and make it happen.’

Speaking at these events and hearing from other leaders in the field ensures Post Office is at the cutting edge of the identity industry, as we evolve as a technology company. This is an essential part of developing the innovative identity products our customers need, now and in the future.