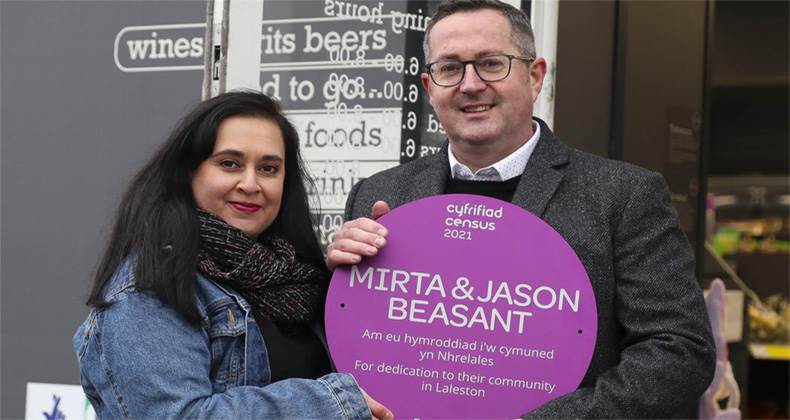 Congratulations to Mirta and Jason Beasant who run Laleston Post Office and Simply Local store (Norther Ireland and South Wales region), they have been awarded a rare Community Hero award to mark Census 2021.

A census is held in the UK every 10 years and this time special Community Hero awards have been created to celebrate the extraordinary contributions of people in their communities.

To mark the UK’s 22nd Census, 22 recipients across the UK were chosen to receive an iconic Purple Plaque including Mirta and Jason, who have run their Post Office and store in rural Wales for the past four years.

The competition which received hundreds of entries across England and Wales, has awarded Mirta and Jason for their services to their local community in Laleston throughout the pandemic, providing parcels to those shielding and going above and beyond whilst running their local shop.

Mirta and Jason commented: “We’re truly grateful to have received the Census 2021 Community Hero Award, amongst the hundreds of entries that were submitted. With so many of us finding ourselves in challenging times due to the pandemic, we wanted to step up and do what we can for our community.”

During the pandemic they organised free home food deliveries for 30 families who were shielding due to being elderly, underlying health conditions or being advised to self-isolate. They also organised posting of letters and parcels, and banking for those who could not leave their homes. They managed this with the help of all their staff but especially Cameron Shann and Callum Morwood.

Mirta and Jason said: “There was a local social media campaign led by regular customers to get us nominated for the Census Community Heroes Award. We never expected an award, but we really appreciate people nominating us. We were just doing what we could to help the community. We wanted to help the community by introducing free home delivery. We were determined to stay open for the community.

“People were really pleased that we remained open throughout the pandemic from early until late which meant that people did not need to travel to visit the Post Office or to buy food. We were three times as busy as normal. People wanted to keep in touch with loved ones with letters and parcels, they were busy clearing out their home and selling items on Ebay and there were lots of home shopping returns. There was also a big surge in banking.

“When we took on the shop four years ago it was in disarray and we refurbished it, which was great as we were well-placed to cope with the pandemic. We were well stocked with food and we had milk, bread and other essentials that the supermarkets did not have.”