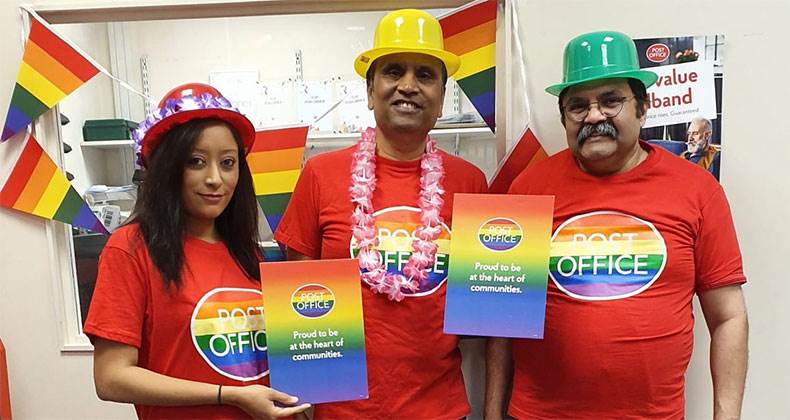 The Post Office Pride team brought a colourful spectacle to the streets of London last weekend, showing that inclusivity is at the heart of our business, and how we’re proud to be a part of every community.

Almost 1.5 million people took to the streets of central London to watch the Pride in London Parade on Saturday 6 July, cheering on more than 600 companies and organisations, who between them assembled 30,000 people to march (and dance!) in celebration of the LGBT+ community and raise awareness of LGBT+ issues.

Our Post Office branch in Rymans on Lower Regent Street (St James’s) was on the parade route, and the team got into the spirit of the day, wearing Post Office Pride t-shirts and decorating the branch with our Pride bunting and vinyls.

Reema Dave, Sales Assistant at Lower Regent Street branch said: “It was a very lively day, it was great to watch and listen to the music, and we had a chat with the Post Office group as they passed us by. We had customers from Pride popping in throughout the day to withdraw cash and sort their currency”.

If these pictures have inspired you, there’s still time to join our remaining Pride events - let us know if you’re interested by emailing Zeinab.Rahman@postoffice.co.uk. Manchester places are almost full, but they’re unlimited at Bolton and Chesterfield (next week). Pride marketing packs for branches can be ordered here.

A full list of pride events taking place across the UK can be found here.

Share “We had customers from Pride popping in throughout the day” with your friends!

Share “We had customers from Pride popping in throughout the day” by Email!