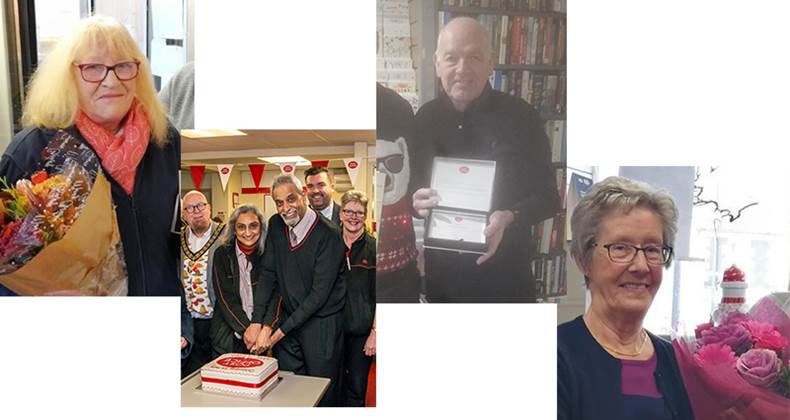 Postmasters are at the heart of our business and play a critical role in making sure communities continue to have access to essential Post Office services.

Some postmasters have been running branches for decades, and last year, we restarted our Long Service Awards to thank postmasters for their loyalty and dedication.

Congratulations to postmasters Margaret Fleming, Gertie Church, Steve Howard and Mac Patel who have recently celebrated their long service with the Post Office.

Read more about their time with Post Office below…

The long serving community stalwart started her Post Office career in Duns branch in 1959 when she was 16 years old. In 1984 she applied for the postmaster’s position in Selkirk branch, which she held for three years until the branch closed in 1987. Margaret continued to work in Hawick Post Office as branch manager from 1987 until 1993 when this branch closed. She then moved to Safeway Post Office and worked there until 2004, when she took over as postmaster at Selkirk branch where she has remained at the helm ever since.

Margaret is now 72 years old and continues to enjoy working in the Post Office serving the community in the Scottish Borders.

Last month Mary Reynolds, Area Manager visited Lochans Post Office to give Gertie Church her 30 year service award. Gertie (pictured right wearing orange scarf) and her husband have run the corner shop/post office in Lochans, just outside Stranraer, Scotland for the last 30 years. Gertie was delighted to receive her award and has seen many changes over the past 30 years.

Mary said: “Gertie is very proud to serve her community and she knows all her customers by their first names as the village is quite small and they are the only corner shop there serving this community.”

And finally, congratulations to Steve Howard (pictured right holding long service award) at Comberbach branch, he was awarded his 50 year service award in December. Steve has had a great career with Post Office, starting in 1969 at North West Postal region in Manchester until 1978 when he moved to Warrington as Head of Finance/Budgets and Counters, followed by a spell at Runcorn.

In 1985 Steve returned to the North West Postal Board as Head of Income Analysis and moved on in 1987 to Head of Corporate Services. He then went on to become a Senior Auditor in 1989 before being appointed Finance Manager at Royal Mail Oxford until 1992 when Steve decided to take on his own branch in Comberbach where he has remained supporting his community with such event as the local fayres and comedy nights.

The Chairman of Aldwick Parish Council, Councillors, The Mayor of Bognor, customers and Post Office Regional Manager for South East region attended a small celebration to mark 25 years of service.

In January 1995 Mac and his wife Naina (pictured right cutting the cake) took over the Post Office and they extended the premises into the garden to increase the retail side of the business - cards, stationery, toys, dry cleaning and repairs and household goods.

Regional Manager Adam France attended the event, he said: “Mac Patel is a great example of a Postmaster. Mac is highly regarded by the community and Post Office. He is loyal, committed, and enthusiastic. He has adapted with the times. Online shopping and banking on behalf of all the main banks is now a major part of his Post Office business and he has really embraced the opportunity to promote the availability of these services at Rose Green Post Office and to also grow the retail side of his business”.