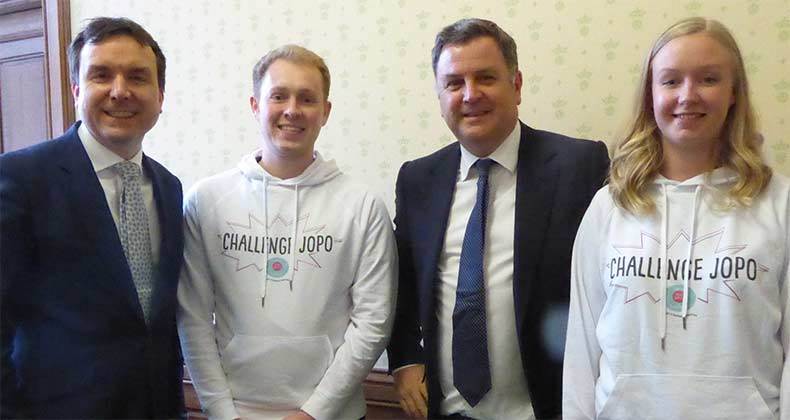 To mark her two year anniversary as a Post Office colleague, Joanna Giles of Ashburton Post Office in Devon decided to celebrate in a most unusual way, challenging herself to travel to the most southern, western, northern and eastern points of the UK with her journey ending at the houses of Parliament. Sounds simple – except that Joanna decided to try and complete her mammoth journey without paying for her travel.

Setting off on 17 April, Joanna successfully completed her journey on 26 April, arriving at the Houses of Parliament to be greeted by her MP, Mel Stride, and minister Andrew Griffith MP who was there to congratulate her effort over the past nine days – and celebrate her raising money for charity.

With various stops at famous landmarks along the way, Joanna also visited St Agnes Post Office branch (most southerly), Belleek branch (most westerly), Baltasound branch (most northerly) and North Lowestoft branch (most easterly). Jo’s trek has seen her undertake a vast amount walking, supplemented by planes, trains and ferries – with some very generous organisations offering her free tickets in order for her to successfully complete her journey.

The money raised by Jo will be split between two organisations close to her heart: Cancer Research UK and a local not-for-profit organisation named Ashburton Arts, which aims to bring performing arts and cultural activities to the Ashburton community and surrounding areas.

Jo has managed to raise over over £2000 so far, and donations can still be made via Jo’s Just Giving page and also in Ashburton Post office, with customers able to donate anything from pennies to pounds reward Jo’s efforts (this even includes old round pound coins!).

Joanna Giles has been working as an apprentice at Ashburton branch, said: “I really just wanted to make a difference to the community, and this has been fun and novel way to do so.

“The support has been amazing and I am really grateful for all the help. The journey has been brilliant, and I’ve been privileged enough to see some amazing sites along the way – including some beautiful and much needed sunshine!

“To end my trip at the Houses of Parliament has been the icing on the cake, and I’m proud to have now completed my travels and raised money for some really worthy causes.”

The Rt Hon Mel Stride, MP for Central Devon, said: “Jo has been very much at the heart of the success story of Ashburton Post Office and I was very proud to welcome her to Westminster today and congratulate her on her challenge and raising money for two important charities.”

Share Mission completed for Ashburton apprentice with your friends!