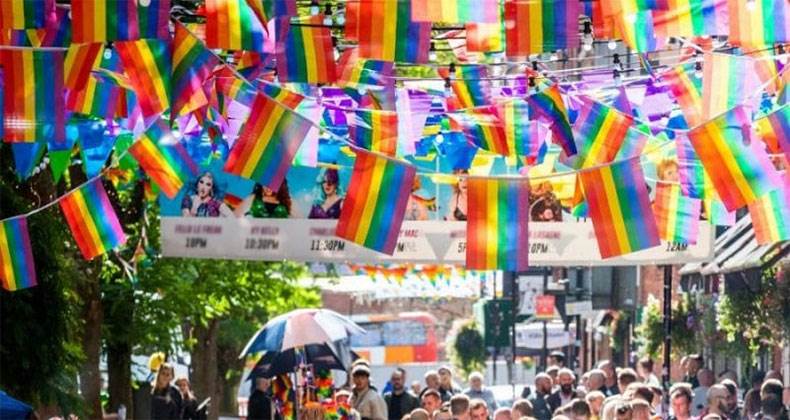 Customers and communities are taking part in Pride events across the UK. Post Office will take part in Manchester Pride for the first time this weekend, so we talked to Postmaster at Cheadle branch Andrew Phipson about how much this means to him and his city.

My home town is Wythenshawe, which is a large council estate in the Greater Manchester area.  When I was in my late teens I was very much attracted by the big lights and the thriving, bustling way of life that Manchester City Centre had to offer.  At the same time I started working for the Post Office as a counter clerk. Since then I’ve continued my employment development and moved into a couple of job roles as Post Office branch manager, working for some of the big multiple partners.

Is Pride and the LGBT+ community strongly supported in Manchester?

For as long as I can remember!  It was one of the reasons that attracted me to make my move out of my parents home and into my own place in my Twenties.  I’ve always lived in or around Manchester City Centre because of the Pride representation it has always had. I moved closer in to the centre when I moved in with my boyfriend where we started our life together.

We were spending more and more time around the centre because we loved the respect and the way we were made to feel safe in the Pride communtity. From the various fundraisers it has throughout the Spring, all the events that are held over the Summer and culminating in the massive Pride festival over the last weekend of August every year.

How was your experience of telling family and friends that you’re LGBT+?

I told my family and friends when I was in my late teens.  At the time I was very much into the ‘Britpop’ era of British music in the late 1990s as a lot of my friends were studying at college.

I was the different one of the group as I had started my employment at the Post Office instead.  At the very same time, Manchester’s Gay Village was emerging as an extremely popular destination due to the Russell T Davis penned TV programme ‘Queer as Folk’.  This was getting its premiere screening on Channel 4.

During our various nights out around Manchester, I used to sneak off to the Gay Village during the night and then meet up with my friends later for the journey home. At the time I thought I was getting away with it, when I come out to them I realised I hadn’t!

I told my family when I met my first boyfriend, I will always remember that day forever.  I remember the nervousness, the excitement and the question of ‘what on earth are they going to think? Both my friends and my family were already aware which took the weight completely off my shoulders.

What does Pride mean to you?

Pride means to me that I can go to a place or destination and feel proud to be there no matter what anybody else thinks of you.

I have never been ashamed to go to a Pride and over the years I have been so impressed with the development that most cities have made in supporting this important issue.

The word development has always been associated to pride with me as well.  This is because ‘coming out’ never stops as your development continues throughout your life.

Do I think that more could be done to raise awareness of LGBT+ issues outside of big cities and enable people across the UK to live their lives on an equal footing?

Yes it’s already taking place with smaller towns organising their own Pride events.  I’ve been to a couple of smaller ones including one in my home town of Wythenshawe over the last few years.

They’re not the same in terms of size and attendance but the same rules apply.  If more people have access to these when they normally wouldn’t then this is still amazing progress.

By promoting inclusion, equal rights and by celebrating sexual diversity and gender variance also builds community which is good for everybody.

Why do you think it’s important that Post Office takes part in Pride activities around the country?

I am 23 years into my Post Office career which has now evolved into me becoming a self-employed Postmaster.

When I look at my fellow colleagues and Postmasters, Pride is even more important now today more than ever especially with the Post Office having one of the most diverse workforces in the world.

And the best thing is, it continues to develop and grow so more people can feel included instead of isolated.

Are you pleased to see Post Office taking part in Manchester Pride?

It is major new start for the event this year, it is still being based around the iconic Gay Village but is covering a larger area than before so more people can feel included in it. So it’s a great time for the Post Office to show they’re supporting a massive occasion like this to everyone involved with the business and to the whole of the UK, that they support this cause not just in Manchester, but across the whole country and beyond.

Share A city to be proud in with your friends!

Share A city to be proud in by Email!