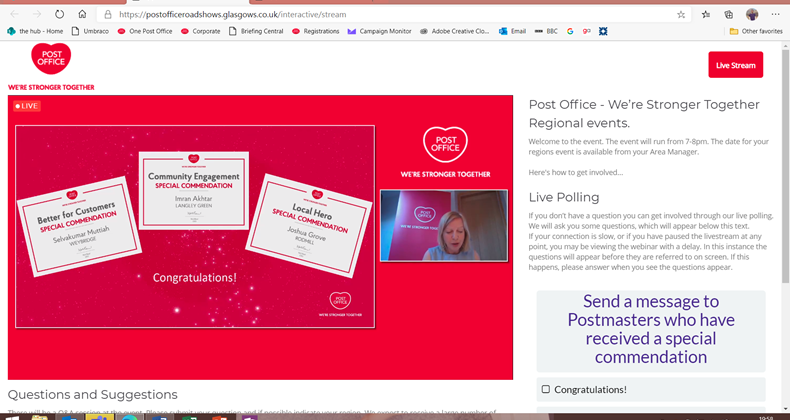 Adam France, Regional Manager, opened the South East’s “We’re Stronger Together” event with a heartfelt and emotional thank you to all of his regions’ branches who had worked so hard for their communities over not just the past three months of the Covid pandemic but for the 18 months he has had the privilege of being Regional Manager.

He told delegates that for all he could mention, and he could mention numerous examples, there was no greater recognition than the fact that the South East was over-represented in the “Thank You” montage – testament to the great work of postmasters throughout the region – and the fact that more than 8,000 customers had taken the time to feedback through the Voice of Customer over the past three months.

Nick Read, Group CEO, delivered a short business update, telling delegates that Stronger Together is not just a logo, it speaks to the truth… without postmasters, there is no Post Office. And that his focus is on building a sustainable Post Office that allows postmasters to thrive, with a focus on being best in class on the Big 4 of Mails & Parcels, Banking, Travel and Bill Payments – transactions that drive footfall into branches.

The Stronger Together events are all about listening to postmasters and a key part of the event was the Q&A session. Martin Kearsley, Director of Banking, and Mark Siviter, Director of Mails joined Nick, Amanda Jones, Retail and Franchise Network Director, Owen Woodley, Group Chief Commercial Officer, and Andy Kingham, Head of Network in a lively and challenging debate hosted by Adam.

Paul Patel from Dibden Purlieu branch challenged Mark on our relationship with Royal Mail and Parcelforce, when they were charging cheaper online postage prices and potentially taking footfall from branches. And followed this up with a pointed challenge to Nick and Amanda around the product sets that branches – especially smaller ones – were able to offer. He gave the example of his own experience of having to turn customers away as was unable to offer them the service they wanted.

Selva Muttiah from Weybridge branch was interested in understanding how Nick’s experience in other, successful franchise businesses was going to translate into making sure Post Office became a preferred franchisee of choice.

Other topics covered included the recent Governmental announcement around face-coverings in retailers being made mandatory, and how Post Office was going to support branch teams. There were questions on the new whitespace branches and the decisions being made around their locations; a question on POca alternatives being pursued by Post Office; the perception that there was only ever a removal of products from sale, and a lack of new products being offered by Post Office; and a couple of questions on Branch Hub.

There were numerous other questions raised – and for those that weren’t answered on the night, the answers to all of these will shortly be cascaded through the Region’s Facebook group (link) Post Office Network South East Facebook group and on One.

But the highlight of the session was the recognition awards for the Postmasters and branch teams in three categories.

Adam said: “I know we’re a high-performing region and I wanted to ensure that our winning branches really set an example to the rest of the country. So I challenged my Area Manager team to find the Postmasters and their teams who really do go above and beyond for their customers and communities. And, wow, they delivered! I can’t believe how many examples of dedicated community service they provided – making our job as judges incredibly difficult, as we could only choose three winners.”

​​​​​​​The winners announced on the night by Amanda are:

Our Better for Customers winner SELVAKUMAR MUTTIAH from WEYBRIDGE branch’s approach is natural, and the customer is the reason he opens the shop. Every customer is greeted in a friendly open manner thanking them for waiting, smiling and giving their full attention to the customer. They treat every customer as individuals to provide a personalised customer experience and really taking pride in their work. Behaviour breeds behaviour, the customers adore this branch, and they are so proud of the community Post Office.

IMRAN AKHTAR at LANGLEY GREEN branch took home the Community Engagement Award. Imran and the rest of his family understand the importance of the community and the role they can play to help those that need their help. Among the many tireless activities, the team has worked with a local taxi firm to deliver free care packages to their customers that included food and non-food items, hand sanitiser and gloves, helping to reduce the risk for those most vulnerable; arranged a collection of Easter Eggs for vulnerable customers and also children of NHS workers; they donated free face masks to local charities. And Imran and family have even created a local music video to promote the store and Post Office!

The final winner was the South East’s Local Hero. Since the start of the pandemic, JOSHUA GROVE at RODMILL branch has been very active, helping and supporting his team, his customers and other local branches. He was very proactive in ensuring both his own team and others received and used the early guidance and PPE, including being the first in this area to build his own additional Perspex screen in the branch. He constantly supports his customers in the local area with deliveries, is active on social media, subsequently donating large amounts of drinks and other items to support the NHS.

These three efforts are amazing and show the dedication and commitment from postmasters across the region. Congratulations to all three.

Share We're Stronger Together in the South East with your friends!

Share We're Stronger Together in the South East by Email!