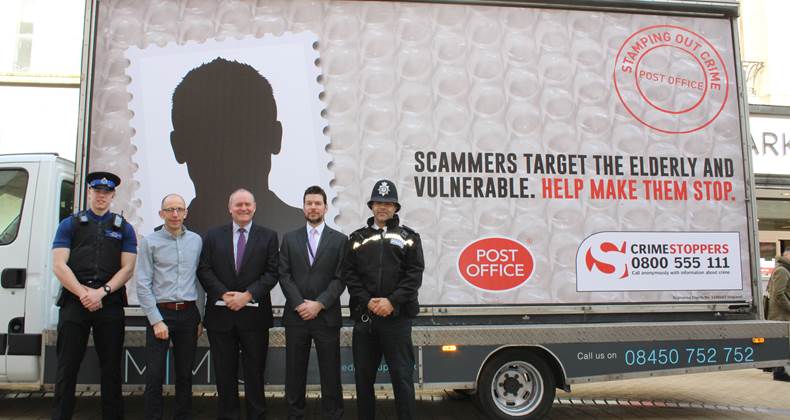 As part of our ongoing commitment to crime reduction and prevention, we have once again teamed up with the independent charity Crimestoppers; this time to help stop scams targeting Avon and Somerset’s elderly and vulnerable community.

The month long campaign which launched on Tuesday 14 March in Bristol will target hot spot areas within the county, in an effort to raise awareness of postal, telephone and online scams that target the vulnerable and elderly. Victims are being tricked out of thousands of pounds by fraudsters using postal, telephone and online scams. Scams involve false stories of lottery wins, inheritance from a long lost relative, romance, and investment opportunities.

One local incident saw a customer attempt to send a money transfer of £200 on behalf of a friend, because she had been told that if she did so, she would receive a share of a much larger sum of over £1 million.

Another incident saw a customer try to send a payment of almost £5,000 to Georgia after receiving a cold call from a scammer pretending to be from TalkTalk. The criminal stated the victim had issues with their router and advised them that cash had been mistakenly transferred to their bank account. The scammer had taken over the customer’s computer and displayed a fake bank statement, showing the fake transfer. As a result, the victim sent money from their account to the scammer.

This campaign follows on from activity carried out in Lancashire last year, and previously in Southend and Rotherham, which resulted in significant engagement with local people. It not only aims to raise awareness, but also encourages local communities to report information relating to scams.

Our robust links with Avon and Somerset Police and local charity Age UK will further strengthen campaign awareness; highlighting that together we can provide greater safety and security for the communities in which our Post Offices reside.

Should you have any questions about the campaign, our partnership with Crimestoppers or how we can further engage the communities in which we operate, please contact securitycommunications@postoffice.co.uk.

Share Protecting the Elderly and Vulnerable in Avon & Somerset with your friends!

Share Protecting the Elderly and Vulnerable in Avon & Somerset by Email!