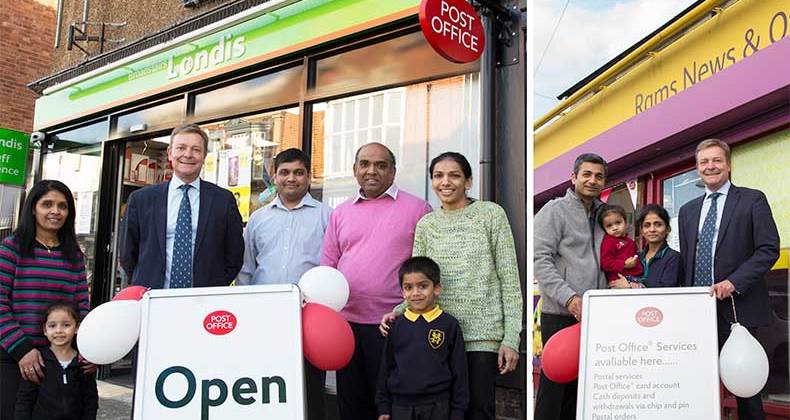 Post Office branches are run by many incredible and passionate postmasters. Latest to join the network are friends, Dimpal and Hiren Patel and Avani and Jalpesh Patel who have opened Post Offices in the district of Thanet on the same day. Their branches, Newington in Ramsgate and High Street, Broadstairs opened doors to the public in September.

A double celebration took place as Craig Mackinlay, MP for South Thanet officially opened both branches which have restored vital services to area.

Craig Mackinlay MP, said: “It is great news that Newington and High Street, Broadstairs branches have opened in popular convenience stores with experienced retailers. Post Offices are at the heart of communities, so it is great that Post Office services have been restored and that both branches have impressive opening hours – much longer than before.”

Dimpal and Hiren Patel took on the newsagents and convenience store in Newington last year and they were immediately asked by customers if they would consider taking on a Post Office, it wasn’t long before they decided to apply to run a Post Office from their store.

Dimpal said: “As soon as we took on the shop, customers asked us to apply to take on a Post Office and we decided it was a really good idea. Our customers are very happy as many have had to travel to get to the nearest Post Office. They are very happy with the longer hours.”

Amazingly family friends Avani and Jalpesh Patel who run the Londis convenience in Broadstairs were also asked by their customers if they would consider taking on a Post Office.

Jalpesh commented: “Customers think it is really good that they have a Post Office again and are really pleased to have a convenient service with extra opening hours back in the area.”

Together they have restored a total of 192 hours of service as both branches are open seven days a week from early in the morning to late in the evening, doubling the hours of the previous opening times.

Both communities are celebrating the restoration of Post Offices services especially with longer opening hours and will surely ‘get by with a little help from these friends’.

Share With a little help from two friends with your friends!

Share With a little help from two friends by Email!