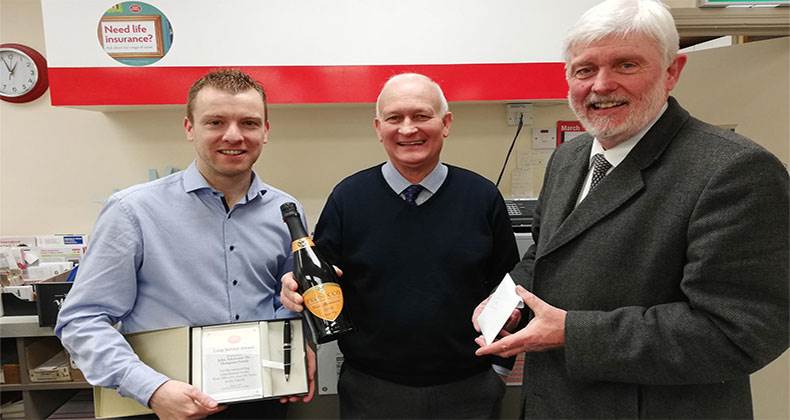 John and Eileen Thompson and family are hanging up their date stamps after an impressive combined total of over 100 years of service.

The Donard branch in Newcastle, County Down, Northern Ireland has been in the Thompson family for 48 years. John and Eileen have been running it for over 20 years, after taking over from John’s dad. John and Eileen also owned and jointly ran Sugar Island Post Office in Newry, but after a few years of running both branches, they decided to concentrate on Donard and run it together. 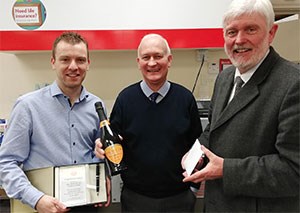 John and Eileen were forward thinking and put their customers at the heart of every decision. Indeed, they believe one of the best decisions they made was to bring the customer relationship manager role to their seaside town, in the midst of local banks closing. Just one example of their dedication to customer service.

At the retirement event, Timmy and Brendan presented John with a £100 One4All gift card, a box of John’s favourite chocolates, a bunch of flowers for Eileen, a bottle of bubbly, a bottle of red wine and a special award to mark over 100 years of service between John, Eileen and John’s father.

John said, “I grew up in the Post Office really. I became a subpostmaster in 1975 and by that time, I was used to my father being subpostmaster before me.

We’ve been in the Post Office for quite a while between us and serving our customers has been the main thing we’ve always really enjoyed about the job. Particularly the older generation, sometimes they might not get many people to talk to during their day, so when they come in, they like a chat.

It was always a joint effort between me and my wife Eileen. You can’t do these things without back up, it takes a team.”

The Thompsons have served Newcastle and County Down well over the years and their length of service is a real achievement. We wish them well for their retirement.

Share Thompsons serve County Down for over a century with your friends!

Share Thompsons serve County Down for over a century by Email!