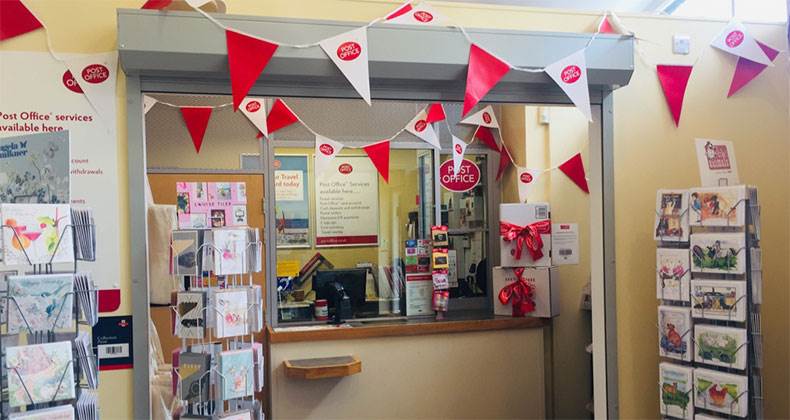 Improvements galore have been made to Dudleston Heath Post Office since Lynn and Ian Johnson took over the branch at Criftins Parish Hall in Dudleston Heath, Shropshire.

An open day was arranged during August at the Parish Hall, to raise awareness about all the improvements made to the hall and Post Office, with coffee, cake, lunches and a bar.

Long-serving Postmaster Heather Clay had retired in early December after 16 years in the role which included the relocation of the Post Office into the Parish Hall in 2011. At the same time Heather's assistant, Gill Hayward also decided to take this opportunity to retire after an impressive 40 years working locally for the Post Office.

The Johnsons took over at the busiest time of the year and immediately increased the opening hours from two days to six days a week. Their rural Post Office had no retail attached, until Lynn, who had worked for Debenhams for 35 years, decided to offer a small range of greetings cards and stationery.

Lynn and Ian share the Postmaster role, allowing them time for other non-work activities. Ian, who previously worked for Airbus as a quality auditor is also a musician who plays double bass and piano. He now has more time to perform his rockabilly and rhythm and blues gigs.

Lynn said: “Both Ian and I worked in the corporate world and we were looking for a business opportunity closer to home. We wanted a better work life balance and we have now got that. We really enjoy being an important part of the Dudleston Heath community.

“People really welcome having a full-time Post Office as they now know that the branch is open every day, except Sunday, rather than in the past having to remember which two days the branch was open.

“There are many elderly people in the community, many of whom don’t drive and they appreciate that they can do their Post Office transactions and there is somewhere selling cards and stationery in Dudleston Heath as it is around two and a half miles to the nearest shop. There is also very easy disabled access.”

As the Post Office is the foyer of Criftins Parish Hall, used by many community groups, they needed an area to lock away their merchandise when the Post Office was not in use.

This project was part-funded by the Post Office Community Branch Development Scheme, which is available to eligible community status branches, where there is no other retailer who could operate a post office within half a mile. The grant paid for a false wall to be installed and a roller shutter, plus mobile storage displays for the new range of greetings cards and stationery. The Post Office signage has also been improved.

Criftins Parish Hall committee has also been busy fundraising and recently secured a grant for £25,000 from the Princes Fund to refurbish the bar and create a community kitchen. Additional funding has also been secured from Tesco, The Co-op, Persimmon Homes and Ellesmere Rural Parish Council alongside numerous private donations.

Adam Shillcock, Area Manager in North West and North Wales, said, "I attended the community celebration organised by the branch and it was jam packed. This is a real success story. I spoke to many people who were absolutely delighted with the new proposition. They reckon they have the best community hub in Shropshire.

"This is a really positive and refreshing story, showing what can really be achieved within rural areas. I was totally blown away and a little jealous I'm not part of that community! I just wanted to give the folks of Dudleston Heath a massive shout out and congratulations."

Postmaster Lynn said, “The Post Office is here for all generations. People can also combine a visit to the Post Office with attending clubs and activities at the hall. We offer a wide range of Post Office services including free cash withdrawals, banking on behalf of the major banks and pre-ordering travel money. There is also a free car park, so we get passing customers, who really appreciate the easy parking and quick service.”