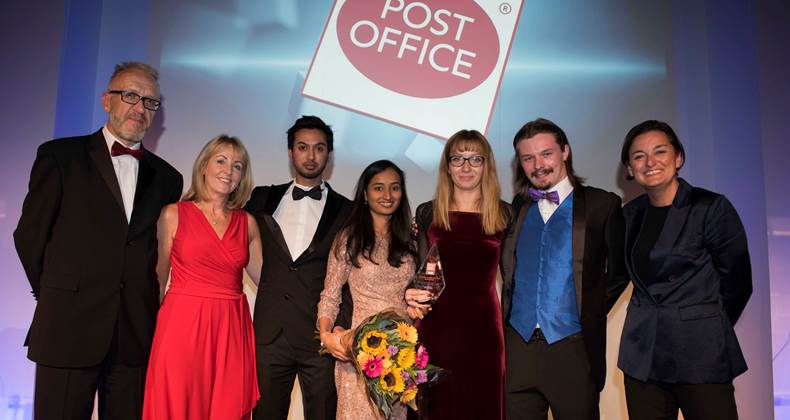 At the Retail Industry Awards 2019 on 17 September, the winners included many Post Office branches, recognising that they are among the best retailers in the country. Congratulations to all of the deserving winners.

Why they won
The awards were judged by a panel of industry leaders, including Karl Oliver, Head of Commercial Partnerships, Post Office. Here’s what the judges said:

Owned by a husband and wife team, this 300sq ft store has succeeded in marrying its retail and Post Office elements to great effect. Customers can browse magazines and freshly baked goods on their way to the Post Office, with bagged sweets by the counter to boost impulse purchases. TV screens in-store show bespoke animations to promote Post Office services.

All baked goods, fruit and vegetables are locally sourced and used wooden crates are donated to local allotment users. The store runs competitions on Facebook in the summer holidays, offering parents the chance to win free passes to local attractions, while a ‘Ring and Bring’ service delivers items to elderly customers in the area.

Judges praised the store’s use of space, with one commenting: “The owners have done an amazing job with such a small space. They have nailed it on every level, maximising the space and the product range.” Another judge said: “The team are totally committed to serving their local community. Their customers are very lucky to have a store like this.”

The retail and Post Office operations at Londis Caterways work together for the local community, aiming to meet all its customers’ need in one place. Post Office services are promoted via social media, along with special offers such as free present wrapping at Christmas and free coffee with any Post Office transaction at certain times of the year.

A digital screen in the main aisle displays Post Office specials alongside their regular store promotions, while all staff members are trained in both areas of the store so they can provide a faster service and reduce queueing times.

The judges were impressed with how they had integrated both areas of the store – with Post Office treated just like any other category rather than as a separate entity. They were also won over by the positive financial performance of the store, which had seen sales increase by 12.5% over the previous year.

Following the closure of several local banks in the past year, Spar Greystone has increased banking deposits at its Post Office counter by 43%, which helped boost its like-for-like sales by around 15%. Every member of staff is trained to work both the post office counter and the retail side of the store.

Customers looking to buy hot food-to-go can pre-order it while waiting at the Post Office counter – choosing from a selection of freshly-cooked toasties and paninis which are ready to collect once they have finished at the Post Office. The Retail Awards judges described that initiative as “impressive”.

Judges also praised the discipline of the team, who reorganised their rotas to make sure more of them were in-store during busier times of the day and week.

Congratulations to all of the deserving winners.

Share Retail Industry Awards – why they won with your friends!

Share Retail Industry Awards – why they won by Email!