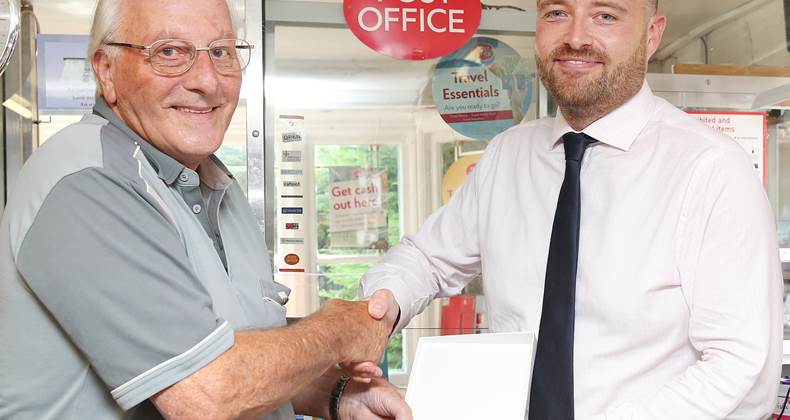 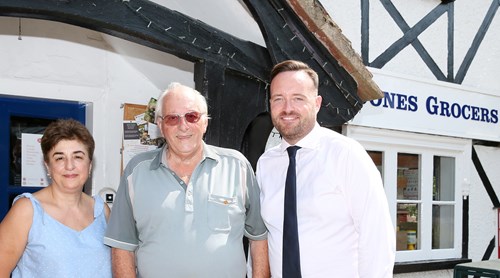 Braughing Post Office has been a big part of Peter Jones’ life. Their father, Harold, became the Postmaster in April 1939. In 1942, Harold was called up to serve in the war. At that time his Mother was expecting his brother, Ian. The family had just one month to find staff to run the shop and Post Office and they were very lucky to find suitable staff to be able to carry on the business during the war.

Peter Jones, said: “I have always lived in Braughing and I really enjoyed serving the community, but at the age of 87, it was time to call it a day as Postmaster. I am glad that Post Office services will continue from the family shop.”

Iain Robertson, said: “I am delighted to be able to present this Long Service Award to Peter Jones, who has been an incredibly loyal Postmaster, who was committed to serve the community for as long as he could. I sincerely thank him for his dedication and I am pleased that we have found a way to maintain a Post Office in Braughing with his well-earned retirement.”

The 87-year-old pillar of the community decided it was time to retire from Braughing Post Office at the end of June, which has been based at the family-owned shop, H & N Jones.

Peter’s brother Ian is continuing to run the shop, which their family have owned since 1930.

Ian, at the age of 76, decided against taking on the Postmaster role. Instead the brothers agreed that a hosted outreach service could operate from their shop.

The Postmaster for nearby Standon Post Office, Mrs Anna Attard-Butler and her team, are providing the outreach service on Wednesday and Saturday mornings, from 20 July. This is a temporary Hosted Outreach service whilst we continue to look for a permanent solution.

Nicki Furr, Peter’s daughter, had assisted in the Post Office, prior to Peter’s retirement.

Mrs Furr, said: “When my Dad was 65 we had a big party and we asked him when he was going to retire. He said, maybe in five years’ time, when I am 70, but it kept going on like that as he enjoyed his job and he didn’t want to let the community down.”

Share Recognition for Postmaster after 50 years’ service with your friends!

Share Recognition for Postmaster after 50 years’ service by Email!