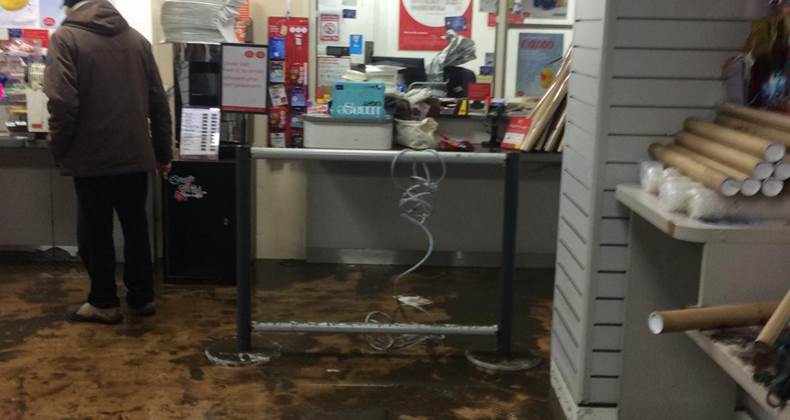 Torrential rain and severe flooding caused by Storm Dennis over the weekend has resulted in the temporary closure of three Post Office branches in South Wales and the Welsh Borders.

Post Office is working hard to restore Post Office service to the communities these branches serve as soon as possible. It is not yet known when the branches will be able to open due to the extent of the flood damage and the flooding in these areas, but, in the meantime, we are advising customers that alternative branches are available in these areas.

Pontypridd Post Office is temporarily closed after the River Taff burst its banks and flooded Pontypridd town centre. A major clear up operation is underway at the branch at 5-7 Mill Street, Pontypridd, Mid Glamorgan, CF37 2SN, in which Area Manager Ceri James was involved over the weekend. Customers in Pontypridd can find alternative branches in the Central Square, Trallwn; Park Street, Treforest; Glyncoch; Cilfynydd; and Rhydfelin.

Whitney-on-Wye Post Office and shop inside Carrot & Wine Stores, Church Barn, Whitney-on-Wye, HR3 6EG is also temporarily closed. The Mobile Post Office service it provides to rural communities is also unable to get out to serve Almeley, Gladestry, Dorstone, Walton, New Radnor, Pembridge, Llangunllo and Wimore because the vehicle was parked outside the store. There are alternative branches for customers to use in Eardisley and Hay on Wye.

In addition, Hebden Bridge Post Office in West Yorkshire has now re-opened and has been running a normal service since last Thursday (13 February), after it was temporarily closed because of flooding during last weekend’s Storm Ciara.