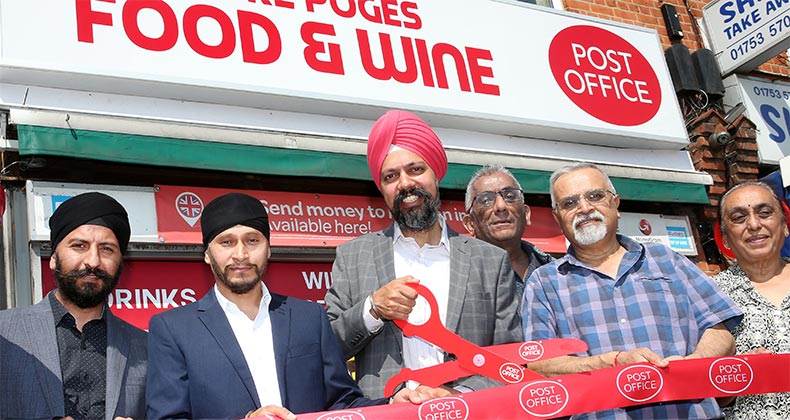 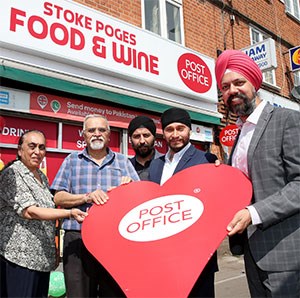 The new owners of Stoke Poges Lane Post Office and store are delighted by the support they’ve received from former Postmaster Vinod Patel. Having previously run the branch for 42 years, he has helped them get to know their new community and make a great first impression on their new customers.

New Postmaster Gurcharan Singh and his cousin Gurjinder Singh, are business partners and both are experienced retailers with convenience and off-licence stores in West London. The former Postmaster, has now retired, but may still be seen helping out at the Post Office from time to time, and has been very happy to share the benefit of his many years of experience as a Postmaster at the heart of his local  community.

Customers can’t believe all the changes

The shop was closed for a month for a full re-fit and changes to the retail stock. It now has a new off-licence section and European foods as well as everyday groceries, and was officially opened by Tan Dhesi, MP for Slough, who cut the ribbon on 12 July after a recent full refurbishment of the premises.

Postmaster Gurcharan Singh, said: “Customers come in and they can’t believe all the changes that we have made in such a short time. They are gobsmacked. There has been a full re-fit of the shop and Post Office and lots of changes to the retail stock, based on what has worked well in our other shops.”

“We have been immensely lucky having former Postmaster Vinod Patel, sharing his 42 years’ knowledge of running the business with us, this has helped us to understand this new community that we have moved to and their needs.”

Gurcharan added, “Many people in the area work shifts or get home from work late, so they are delighted that they visit their Post Office in the early morning, the evening or throughout the weekend. There is lots of free parking as well, so it is a very convenient shop to visit.”

Tan Dhesi, MP, said: “The Stoke Poges Lane community were very fortunate to have loyal Postmaster Vinod Patel running their Post Office and shop for 42 years. The shop and Post Office have now been taken over by the very capable and experienced retailers Gurcharan and Gurjinder Singh. They have done a fantastic job modernising the store. The impressive new opening hours of the Post Office, which is now open seven days a week from early until late, will make it much easier for people to visit.”

Share Keeping up with the community with your friends!