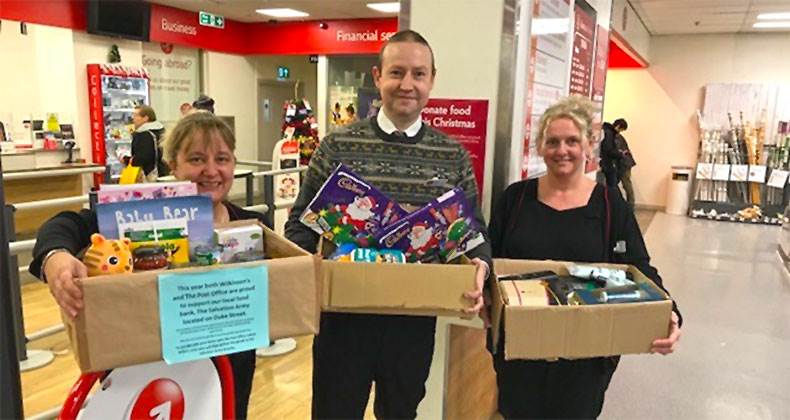 At the end of October Dave Woodhead, Branch Manager at Sheffield Post Office, a Directly Managed Branch, had a conversation with a regular customer who volunteers at a local food bank in Sheffield. He explained that a local food bank was really struggling to cope with the increased demand for their services, especially at this time of year.

Recognising that some of the people using the food bank would be the branch’s core customers, he wanted to see if Sheffield Post Office could give something back to the community by accepting donations from customers and the general public then delivering them to the food bank.

Dave took advantage of Yammer to enquire whether this was possible and if anyone could help create some posters that could be used in branch to notify customers. With the help of Mark Davies, Group Communications and Corporate Affairs Director and Jonathan Knox, Production and Channels Manager, they had a few posters made that they could display around their branch to help encourage customers to donate items. And then with the generosity of both customers and staff they have been helping spread Christmas spirit throughout the community and giving back to those in need.

The example of Sheffield Post Office is a phenomenal illustration of the hard work done by postmasters and their teams for their communities up and down the country. Stories like this and of Ashford Post Office in Kent demonstrate the vital role Post Offices play in the community, particularly in the run up to Christmas.