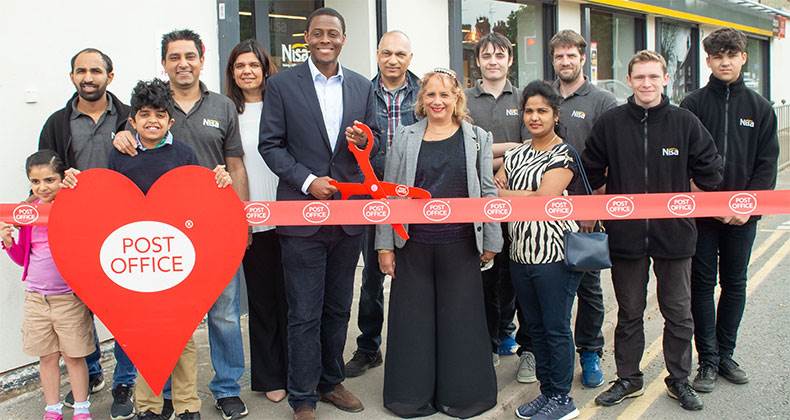 Bim Afolami, MP for Hitchin and Harpenden, cut the ribbon on 29 May at the official opening of brand new Woolgrove Road Post Office and the relocated MPM convenience store, that have opened at the former The Sailor pub in Hitchin, Hertfordshire.

Postmaster Gagandeep Singh, who has personally run the family MPM Convenience store for the past 12 years, says that the retail area has more than doubled in size. This has allowed him to greatly increase his product range and to increase the amount of fresh food and fruit and vegetables stocked.

Mr Singh, said: “Our previous store was too small and we were looking for larger premises to expand our retail. The community could not be happier. The premises, that had been an eyesore after the fire, have now been redeveloped and there is a bigger and better shop and a Post Office.”

Mr Singh added, “Customers had kept asking if I could open a Post Office and they are delighted that Woolgrove Road Post Office has opened. People are amazed at the redevelopment as they cannot tell that it was once a pub.”

Bim Afolami MP, said: “I am delighted to see the former The Sailor pub restored after the fire and the premises put to good community use for a Post Office, convenience store and homes.

The Sailor pub closed in 2013 due to a planned redevelopment of the site and was damaged by fire in 2015. The facade of the former pub has been retained and the building extended and transformed into a convenience store and Post Office with flats above.

The MPM convenience store, which has been run by members of the Singh family for the past 35 years has moved from nearby in Woolgrove Road to the much larger premises.

John Rollason, Post Office Area Network Change Manager, said: “We want to make it as easy as possible for customers to pay their bills, withdraw cash from their bank accounts, and send and collect their mail at a time and place that suits them best. We know how important our services are to customers, and are confident that this brand new Post Office alongside the other branches in the area at Highbury and Hitchin will ensure that people in this area of Hitchin have easy access to our services.”