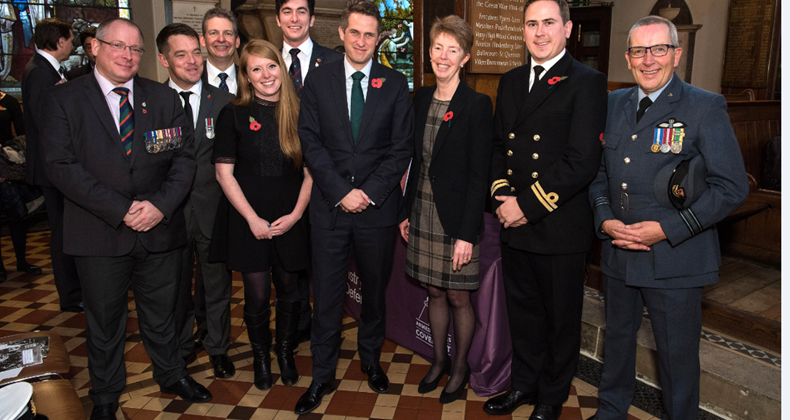 On 7 November, Post Office became the 3,000th business to sign the Armed Forces Covenant; a promise by the nation, ensuring that those who serve or who have served in the Armed Forces, and their families, will be treated fairly. 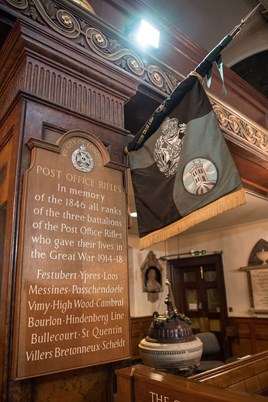 The ceremony was attended by UK Defence Secretary Gavin Williamson and people from our business, including current and former members of the Royal Navy, British Army, RAF and reservists. It was a moving occasion, paying tribute to those whose bravery will never be forgotten.

• More than 75,000 GPO employees left their roles to fight in WWI, 12,000 joining the GPO’s own regiment, the Post Office Rifles, who earned high praise and a prestigious place in British military history. About 1,800 of their soldiers were killed and 4,500 injured in numerous battles between 1868 and 1921.

• Wreaths were laid at the ceremony by our Group CEO Paula Vennells; Royal Mail Group’s CEO Rico Back and Defence Secretary Gavin Williamson.

• The signing took place at St Botolph’s-Without-Aldersgate Church in central London – a poignant location with strong links to our military history. Inside the Church is a dedicated memorial to the Post Office Rifles and their battle flag. The Victoria Cross Medal, which was awarded to a member of the Post Office Rifles, Alfred Knight, in 1917, was also on display at the church.

“Bullets rattled on my steel helmet – there were several significant dents and one hole – part of a book was shot away in my pocket; a photograph case and cigarette case probably saved my life from one bullet which must have passed under my armpit”

Ahead of the signing, Defence Secretary Gavin Williamson met some of the ex-Forces and Reservists working here, including Craig Bibby, who served with the Army for nine years and joined the Post Office in July this year, his first civilian role since leaving the Forces.

Craig credits his military career with giving him the leadership and critical thinking skills that he’s now putting to good use in his new role in IT. Post Office has an Ex-Forces and Reservists network, one of several groups at Post Office run to support people and celebrate diversity.

“The Post Office has a long and distinguished history with the Armed Forces and it is fitting they are the 3000th signatory of the Armed Forces Covenant. Those who have served our country so courageously deserve the full support of organisations and businesses across the public and private sector. Today, the Post Office has demonstrated the value that reservist and ex-service personnel can bring to businesses.”

“The success which has always attended the efforts of this Battalion is due to the splendid co-operation between all ranks and to the indomitable spirit and devotion of each individual man.”

“It’s a real honour to sign the Armed Forces Covenant on behalf of the Post Office at this very special service. For us, today is about honouring and remembering the people who made the ultimate sacrifice for our country - including those that served in the Post Office Rifles and who earned high praise and a prestigious place in British military history as a result of their commitment and bravery.

“But it is also very much about those here today, and recognising the value that our serving personnel, both Regular and Reservists, veterans and military families contribute in the present to our business and our country.

“We know that having a diverse workforce brings huge benefits to a business; and our ex-Armed Forces colleagues and those in the Reserves are a unique and vital asset to the Post Office. We want to thank them for their service and to ensure that we continue to create a business in which everyone can thrive and develop as part of the Post Office team.”