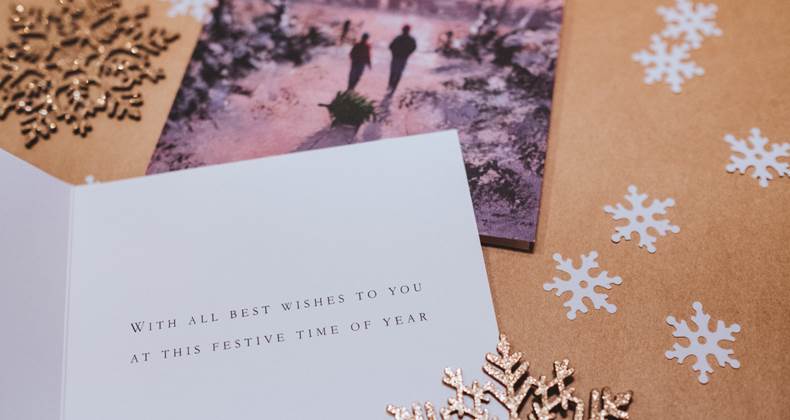 Some 62% of us still buy and send Christmas cards of all kinds. They spark Christmas spirit, let people know we care, and help support worthy causes. But will they matter as much tomorrow as they do today?

Plus 900m boxed cards worth around £230m. That’s according to reports from the Greetings Card Association (GCA). It also found that each of us sends an average of 11 Christmas cards a year. In our digital world, there are plenty of alternatives to traditional cards. Like e-cards, emails, Facebook stickers and charity donations. But we still love to send a little festive cheer in the post.

More than just a card

Cards are as much a part of Christmas decorations as trees, fairy lights and holly wreaths on the front door. Opening and displaying Christmas cards in your home sparks all sorts of emotions, like pride and joy. Card sending and display is a big part of our culture, and not just at Christmas. Putting pen to paper – and taking the time to post a card lets people know you’re still there and thinking of them. A card is tangible proof of warm sentiments, especially if you won’t see the recipient at Christmas.

The GCA also found that Christmas card sales raise more for charity than any other festive fundraising activity. It’s a quick and simple way to help a charity you care about. Concerned about how much charity card retailers actually donate to their cause? If you want to be sure that at least 60% of the retail price is donated, buy direct from the charity concerned.

Older customers are more likely to buy paper Christmas cards than the under-35s. But that’s not to say that younger customers have ditched the tradition in favour of texts featuring a blizzard of emojis. Research giant Mintel discovered that 51% of 25-34 -year-olds who buy Christmas cards think it’s worth spending a bit more on single, high-quality ones.

Claims the GCA. That means the environmental impact of sending paper cards is arguably lower than many of us might think. A spokesperson from conservation charity The Woodland Trust told the BBC: “When buying cards, shoppers should only buy those that either say they are 100% recycled or have the Forest Stewardship Council (FSC) symbol printed on the back.” The FSC symbol confirms the paper has been responsibly sourced from wood that comes from well-managed, FSC-certified forests and/or recycled materials.

Our card buying habits might change with the times. We may find ourselves sending more of them at different stages in our lives. But as long as Christmas spirit is alive and kicking, the answer to our burning question is a big yes. Sending Christmas cards to those who matter most is a labour. But it’s a labour of love.